The Japanese Wife Next Door

An outrageous and insanely over the top erotic (‘Pinku’) movie that delights in breaking several taboos, in the unique way that only a Pinku movie can! The story starts with office worker Takashi, who shares a drink one night with two women (Mina and Sakura). Fate intervenes and he subsequently ends up marrying Sakura (played by busty JAV Idol, Reiko Yamaguchi). The newlywed couple move into Takashi’s family home (shared with his sister, father and grandfather), but Sakura’s nymphomaniac sex drive soon starts to cause tensions. When Takashi starts to falter in his marital duties, Sakura turns to the rest of the family in order to satisfy her nympho lust…. Trivia: This movie was followed by a sequel (The Japanese Wife Next Door – Part 2) which features the exact same cast, but follows Takashi’s fate if he had married Mina (the other woman he shared the drink with that night) instead. 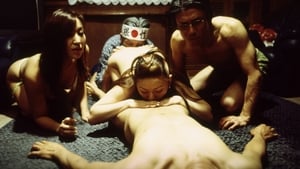